In September, 2014, I was involved in two art exhibitions held in St. Petersburg, Russia and the summary of the exhibitions and the Nihonga master class workshops is indicated in the following report.

I presented four paintings of my Nihonga works as an invited artist for the exhibition and held master class lessons of Nihonga at the City Sculpture Museum in St. Petersburg.
During the opening reception attended by the local government officials, Chief Consul of Japanese Consulate General in St. Petersburg, Mr. Akira Osawa, introduced my creative activities in Russia. The key theme of protecting animals for this international exhibition shares a common concept with my works to portray a sense of awe for nature.
I felt a great deal of encouragement to find that all the transnational artists who took part in the exhibition shared the same values and thoughts for the creative works.
I would like to express my heartfelt appreciation for all the people whom I encountered at the exhibition, the organizers who had invited me, and also for the curator, Ms. Marina Krasinilkova, who had arranged everything for the exhibition for me. 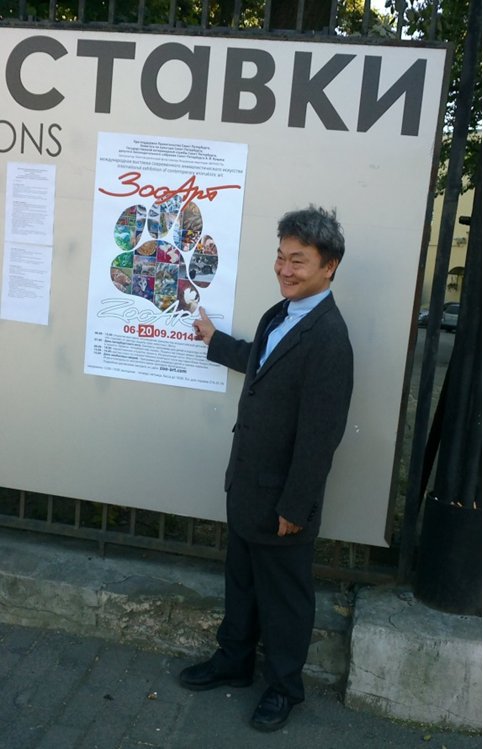 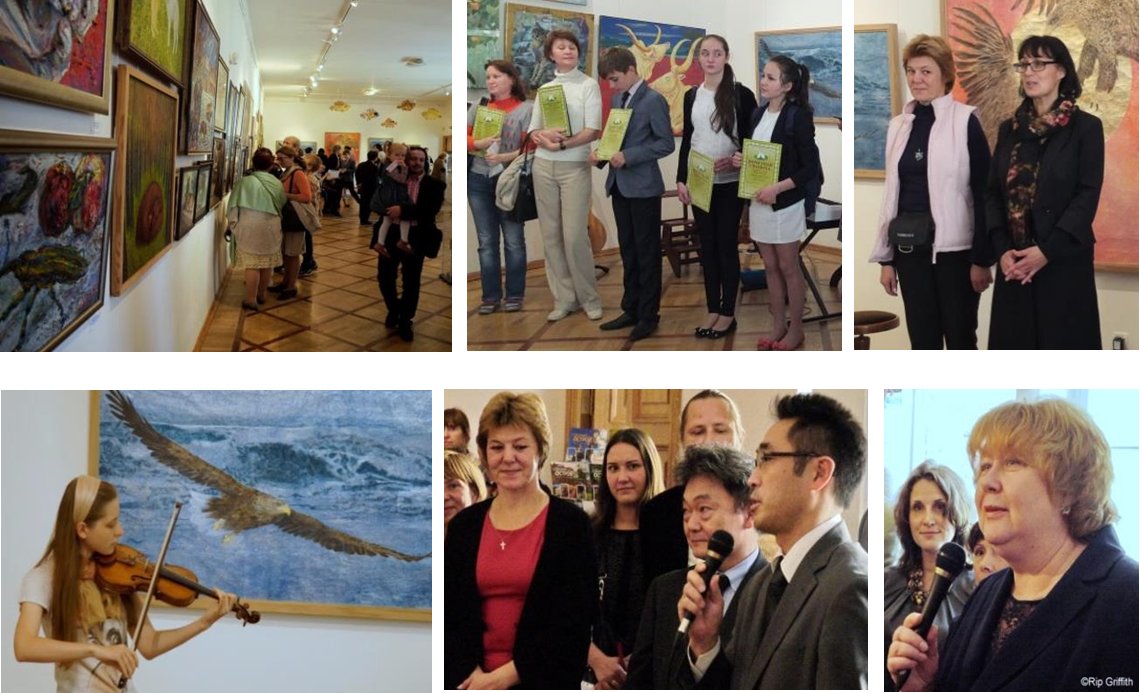 September 7 - 27, 2014
At Bolin Art Gallery
Collaborated with International Academy of Art of Russia 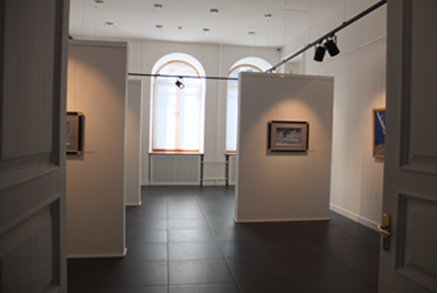 My solo exhibition, for the first time in Russia, was held for three weeks at the Bolin Art Gallery in its serene and beautiful exhibition space facing the street leading to the State Hermitage Museum.
With some of the pieces changed during the exhibition, a total of 41 works were presented.
At the opening reception, the Japanese Consul in St. Petersburg, Mr. Yoshihiro Yamamura, made a speech on my works and creative activities.
Thanks to all the favorable conditions including the media coverage, I enjoyed the privilege of many people visiting to view my works. In addition, including a master class workshop and a gathering with Art University students conducted with the support from Ms. Ksenia Kvatova and her staff at the gallery for the preparation and arrangement, the solo exhibition turned out to be a very special one. 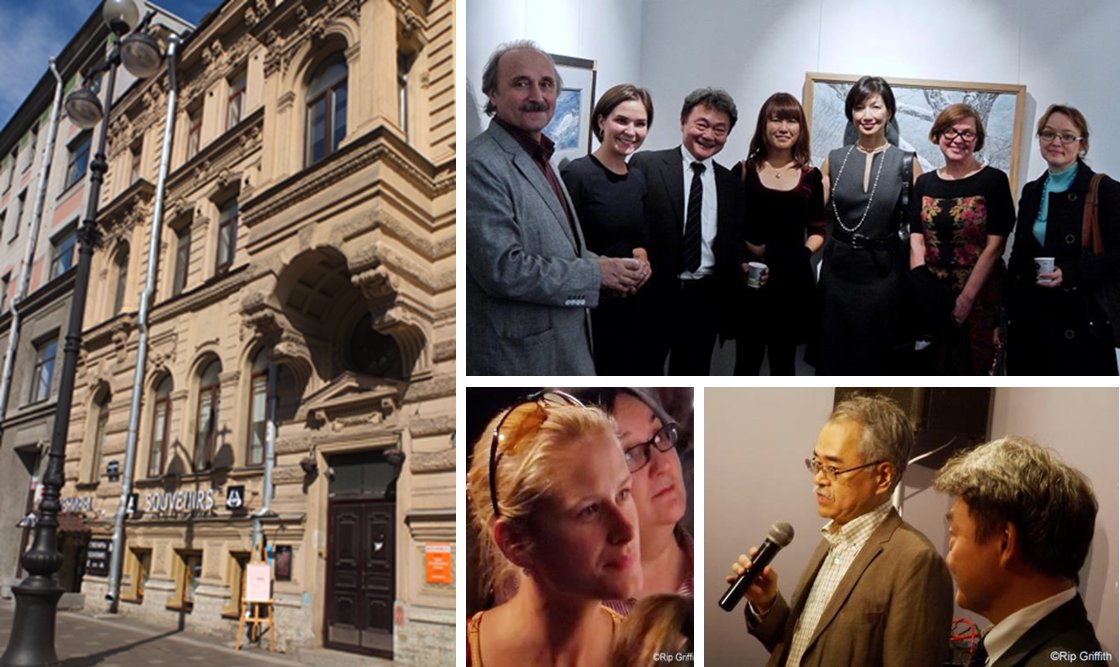 The students in 14 year-old and 17 year-old classes participated in this workshop.
The enthusiastic look in their eyes and the energy of excitement filled the room, and their feelings toward peace and nature were conveyed in the works.

The students in graphic design (paper support) study attended the workshop while the vice-president and professors audited. It helped to enhance the understanding of Nihonga and of the traditional culture. 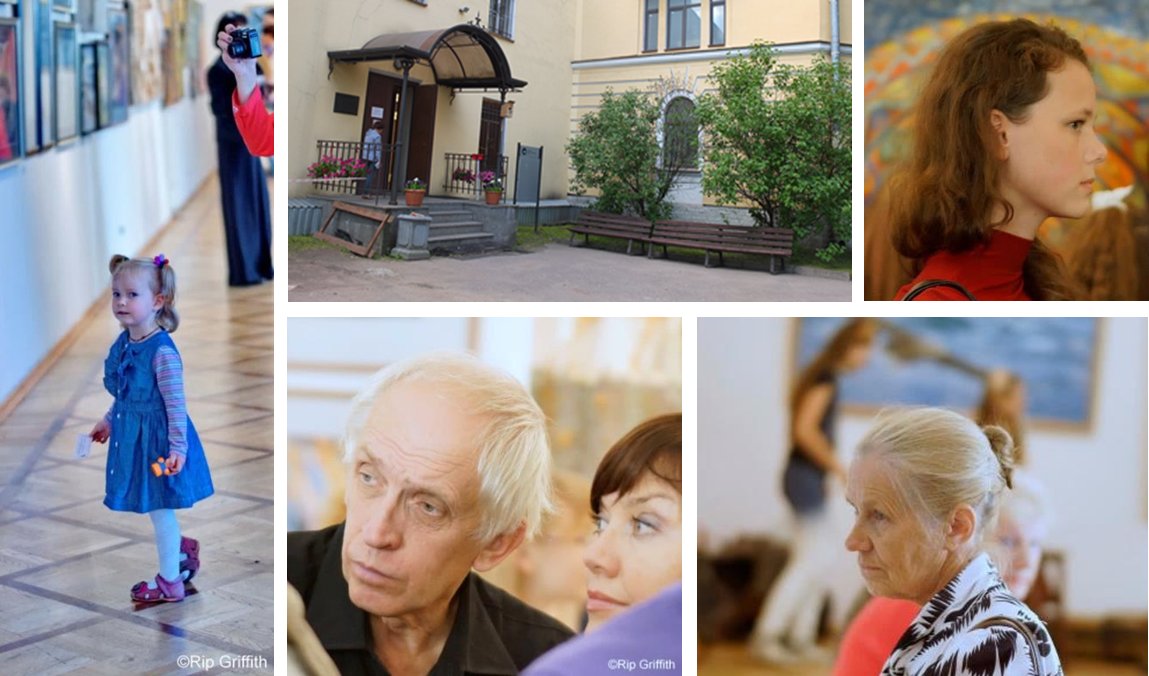 I would like to mention that I am truly thankful for Mr. Sultan Abaev, Principal of the International Academy of Art in St. Petersburg, and his family and the friends for their unchanged support and friendship, ever since the photography/Nihonga exhibition held at the Smolny Cathedral in St. Petersburg in 2012 which was made possible with the invitation from Mr. Toshio Fukuda, photographer. Without their devoted support, I could not have done any of the activities in Russia. In addition, I would like to mention that some of the photos in this report were made available through the courtesy of Mr. Rip Griffith, international photographer and a friend.
The friendships and strong ties I have come to nurture with the people I have met in Russia have become truly invaluable to my life.
It was also a great honor and sheer pleasure for me, as an artist, to have the chance of Mr. Vsevolod Petrov-Maslakov viewing my works and to receive encouraging comments to continue with my painting.

I have been invited for another solo exhibition in 2015 in St. Petersburg, in which I may be able to create an anticipated opportunity for visually impaired persons to appreciate my Nihonga works with the support from Russian government.

I would like to continue my creative activities seeking new possibilities of Nihonga.